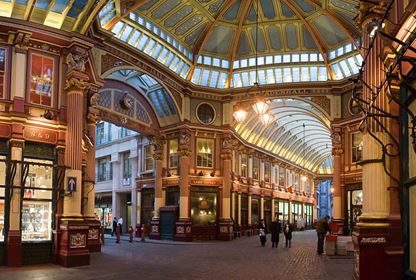 Join us for a shopping trip to Leadenhall Market this Sunday. Enjoy a spot of window shopping, real shopping or admire the sights as one of the oldest markets in London!

This covered Victorian market is one of the oldest markets in London, selling meat and fish as far back as far as the 14th century. The current green and red roof, however, was constructed in 1881 and made Leadenhall Market a popular attraction in London.

The marketplace was featured a few times in the Harry Potter series — it was the film location for some of the original exterior shots of Diagon Alley, the cobblestoned shopping hub of the wizarding world where Hogwarts students can stock up on school supplies like spell books and wands.

If you wander down the market’s Bull’s Head Passage you may recognize the blue door of an optics shop (an empty storefront at the time of shooting) as the entrance to the Leaky Cauldron in Goblet of Fire. In the films, the magical Diagon Alley is accessible to wizards and witches from London through the Leaky Cauldron, an assuming pub wedged next to a record store. If only that were true for us Muggles.

Drinks, refreshments and purchases on the day