Theatre - Pirates of Penzance underneath the Cutty Sark : London

Events/Holidays >> Theatre - Pirates of Penzance underneath the Cutty Sark 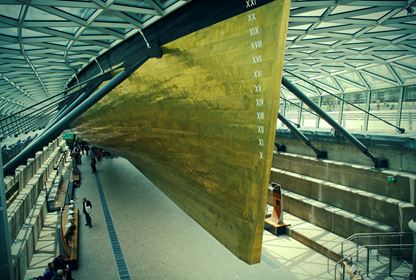 In order to celebrate her history, a wonderful and diverse programme of events are being put on throughout the year which relate to the magnificent maritime history of this majestic vessel. We have manged to secure tickets for the final night of a run of the Gilbert and Sullivan classic - Pirates of Penzance - which will be performed by the Merry Opera in the Sammy Ofer Gallery (UNDER THE SHIP!!!) This performance will mark one month's progress of the build of Cutty Sark exactly 150 years ago.

The Pirates of Penzance remains to this day one of Gilbert and Sullivan's most beloved operas. Buckle your swash and prepare to be entertained by an evening packed full of sentimental pirates, blundering policemen, absurd adventures, improbable paradoxes - and realistic women.

Over the last decade, the professional opera company Merry Opera, have toured and entertained more than 54,000 audience members. Their singers go on to perform at prestigious venues such as Royal Opera House, Festival Hall, Grange Park, Wexford and young artists' programmes in Frankfurt, Stuttgart and Freiburg; have been scouted for leading roles in la Traviata at Wexford and Vienna; and won accolades such as the Bayreuth Wagner prize.

"Merry Opera has a nice line in these slightly off-beat touring shows, performing them with charm, energy and wit." - Opera Now

"The future of opera is being seeded here, and it needs nurturing." - The Daily Telegraph

"This is opera for people who don't like opera, but more interestingly it's also opera for those that love it."- New Statesman

Theatre - Pirates of Penzance underneath the Cutty Sark

Theatre - Pirates of Penzance underneath the Cutty Sark Pricing

Spice Host, Ticket to the show including a Welcome Drink.

Any drinks bought on the night.

One of our lovely Spice Hosts will meet you at the entrance to the Cutty Sark at 19:00. The show starts 19:45.