Theatre - 9 to 5: The Musical With Music by Dolly Parton MORE TICKETS ADDED : London

Events/Holidays >> Theatre - 9 to 5: The Musical With Music by Dolly Parton MORE TICKETS ADDED 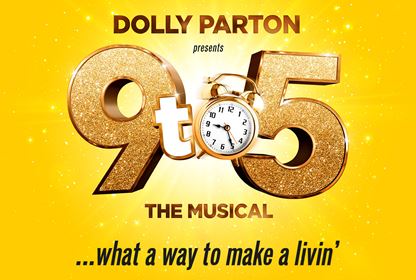 TUMBLE OUTTA’ BED AND STUMBLE TO DOLLY PARTON’S RIP-ROARING WEST END MUSICAL! 9 TO 5 THE MUSICAL is about to get down to business – with a strictly limited season at the West End’s Savoy Theatre.

Starring Louise Redknapp, Amber Davies, Natalie McQueen and Brian Conley, the smash-hit musical features a book by the iconic movie’s original screenwriter Patricia Resnick and an Oscar, Grammy and Tony award-nominated score by the Queen of Country herself, Dolly Parton.

9 TO 5 THE MUSICAL tells the story of Doralee, Violet and Judy – three workmates pushed to boiling point by their sexist and egotistical boss. Concocting a plan to kidnap and turn the tables on their despicable supervisor, will the girls manage to reform their office – or will events unravel when the CEO pays an unexpected visit?

Inspired by the cult film and brought to you by Dolly herself, this hilarious new West End production is about teaming up, standing up and taking care of business!

Due to very popular demand, we have managed to get 10 more tickets for this event They are at a slightly increased price, as the previous tickets were an early bird price direct from the theatre.

Theatre - 9 to 5: The Musical With Music by Dolly Parton MORE TICKETS ADDED

Theatre - 9 to 5: The Musical With Music by Dolly Parton MORE TICKETS ADDED Pricing

We meet outside the main entrance. Your Spice Host will be there to greet you so we can head in together and go for a pre-show drink in the bar.

Sorry there cannot be any refunds on these tickets unless we can resell your slot.

If you have not arrived by 7.10pm your ticket will be at the box office for you to collect.