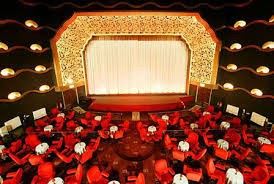 Meet at the entrance to The Odyssey Cinema at 6.30pm and we will enter the beautiful, art deco cinema to see the film Last Night in Soho.

After being derelict for a number of years, The Odyssey Cinema has been magnificently restored in all its art deco glory and offers a large single screen with traditional balcony seating and a downstairs table and chair seating area, complete with a fully stocked bar serving a wide range of drinks and snacks. Cinema members are given priority on ticket sales but we have managed to secure some for this showing and we would love to bring you along. Once you've been to the Odyssey, you won't want to watch a film anywhere else!

About: Last Night in Soho

Eloise finds her happy place when she slips back to the swinging ‘60s, where her identity merges with that of an aspiring singer, Sandie (Anya Taylor-Joy). Among the glamour and decadence is Matt Smith as the handsome, smooth Jack. But maybe 60s Soho has a darker side, too.

Using a soundtrack of The Kinks, Walker Brothers, Cilla Black and Dusty Springfield to propel us on a hugely enjoyable, campy and stylish, yet genuinely scary path that also touches on mental health issues, sexual predators and the demons of creativity.