Red Stripe Band at St Martin's in the Field : London

Events/Holidays >> Red Stripe Band at St Martin's in the Field 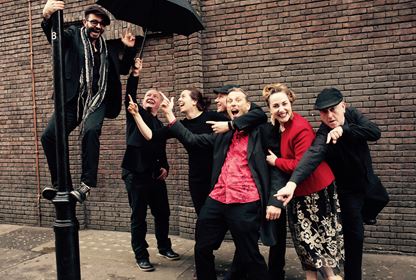 The Red Stripe Band are an award winning band who are celebrating their 22nd year in the business. They have played to over 250,000 fans worldwide. Their colourful career has seen their latest original CD “Soho Surprise” top at number 10 in the London Jazz Charts and their songs ave been used on Radio and TV alike including a Pizza Giant Papa Johns in the USA. They have played at every Jazz and Blues festival you can think of in the UK and also picked up best newcomer at Montreux Jazz Festival in 2010. At their performance you can expect an engaging and energetic mix of 1930's boogie , 1940's swing and 1950's rock n roll. So join fellow Spicers for a night of high energy and great tunes!

"Imagine a smaller version of the Jools Holland Orchestra without the annoying front man!" –Time Out

Red Stripe Band at St Martin's in the Field

Red Stripe Band at St Martin's in the Field Pricing

Any food or drink purchased on the evening.