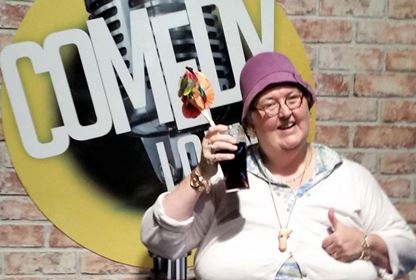 Tracey is married to Terry aka ‘Biff’, and they’re happy with the whole thing… (He’s happy with her whole, and she’s happy with his thing!) Together they live in a lovely, quaint, picturesque, fishing village calling Wolverhampton on the beautiful outskirts of the West Midlands (with dirty curtains).

After spending the majority of her youth ‘treading the boards’ (15 years of it!) as a thespian starring in many comedies and pantomimes, Tracey developed a talent of being able to portray different characters. Combine this with being ‘an almost made it’ karaoke singer, this resulted in her still on stage, being laughed at all over the country.

Tracey’s comedy career began in 2000. She was asked to do a routine for an 80th birthday party. So, after a rummage and a firk in a local charity shop, Tracey invested in a ‘posh frock’ and her infamous purple hat. Couple with a pair of 1920’s specs and threadbare cardie… A 20 minute spot left the audience reeling with laughter, and comics’ ultimate compliment. A couple of folk had pee’d themselves with laughter!

This will be a fantastic night of floor filling entertainment NOT TO BE MISSED!!

This is not a Spice exclusive, however we will all be sitting together on one large reserved table.