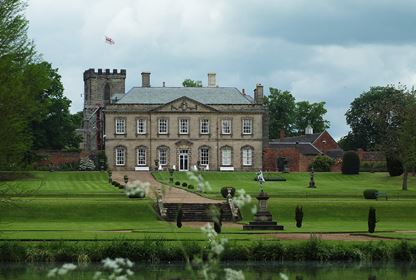 They only open at certain times of the year and we have arranged a private introductory talk half an hour before the house opens to the public. We are then free to explore the house further. After the house we can explore the gardens and there is of course a visitor centre and tea rooms to compete our visit. Melbourne Hall Is now the home of Lord and Lady Ralph Kerr, Lord Ralph being a direct descendant of Sir John Coke who made Melbourne his home in 1629. "Melbourne Hall was, and mercifully is, one of the most exquisite of the smaller stately homes of England, while the formal gardens... are as close to perfection as any in the country...". Philip Ziegler Melbourne Hall stands in an idyllic setting at the east end of the village overlooking the 20 acre mill pool. Passers-by get little more than a fleeting glimpse, because its principal aspects are south and east towards the parkland and gardens, while the courtyards and outbuildings separate it from the village to the north and west.

The house has a chequered and unusually well-documented history, and all centuries from the 16th to the 20th have left their mark on the fabric. This combined with the fact that Melbourne remains a lived-in family home, accounts for its warm, welcoming and comfortable atmosphere. The Melbourne Hall garden with its broad sweeps of lawn, avenues and unexpected vistas, is one of the best known historic gardens in the country and is the best surviving early 18th century English garden in the manner of Le Nôtre. It was never considered ordinary. As early as 1712 it was described as ‘curious’, and by 1789 it was not only curious but ‘old-fashioned’ as well.

There is a lovely café for after the visit

Yes very good event - and the guide was interesting and informative. Really enjoyed looking round the hall and gardens.