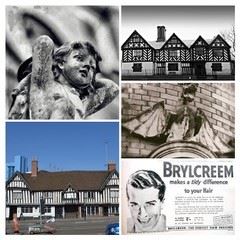 Join Kevin on the stroll around Digbeth...

Starting at The oldest pub in Birmingham, The Old Crown in Digbeth. we make our way around Deritend.

Deritend was first mentioned in 1276 and is brimming with fascinating history and architecture.

The tour is about 2 miles and takes approximately 2 hours, starting and finishing at the Old Crown pub in Digbeth. The terrain is mainly flat but good mobility is required as we will be in an urban landscape. If you're interested in Birmingham, its history and architecture, this is for you.

Kevin Thomas is a photographer based in Kings Heath, Birmingham. his work has been published in The Independent on Sunday magazine, and has exhibited at both the Avoncroft museum and the Midland Arts Centre. His work is researched based celebrating the art and architecture of Birmingham The Letterboxes of the Jewellery Quarter exhibition was held at 1000 Trades as part of Birmingham Heritage week. The History from the 50 Exhibition was shown at the Kitchen Garden Cafe in 2017 Birmingham Art Deco, and William Bloye was exhibited as part of Birmingham heritage week at the Gunmakers Arms 2018.

If you're interested in Birmingham, its history and architecture, this is for you.