Burns Night at the Panopticon : Scotland

Events/Holidays >> Burns Night at the Panopticon 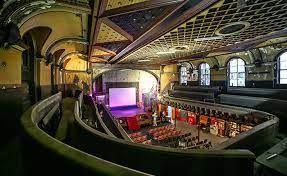 An evening of Burns inspired comedy, music and whiskey.

Famed as the place where 16-year-old Stan Laurel made his debut, the Britannia Panopticon is the oldest surviving music hall in the world.

Converted from warehouse to music hall in 1857 and licensed in 1859, the Britannia Music Hall entertained Glasgow’s working classes for nearly 80 years. It began as the back room to a pub with comedy acts and dancing girls. By the time it closed in 1938 it had also accommodated cinema, carnival, freak show, wax works, zoo, art gallery and hall of mirrors and was latterly known as the Panopticon (meaning “to see everything”).

Today the Britannia Panopticon Music Hall is an ongoing conservation project which was begun in 1997 and everything we do in the auditorium is to ensure the continuation of that project and the future of the music hall.

Burns Night at the Panopticon

Burns Night at the Panopticon Pricing

Please meet at the main entrance at 6.45pm. The show starts at 7pm and runs through to 9.30pm. latecomers may not be allowed to come in so please be on time.

40 Reasons to Join Spice - No. 1
There are many reasons for you to join us at Spice.
Continue Reading The Fife Pilgrims Path Walk Series
As we approach the 1/2 way mark of our walk series I wanted to say how much we are all enjoying the walks.  As with all Spice events, members are getting to know others as we go.  Real friendships are being made as well as excellent exercise for the body and mind.
Continue Reading Getting outdoors again in Scotland
Scotland is slowly opening up and we are now able to offer walks outdoors for up to 15 members in our local authority areas.
Continue Reading
More news
Spice on YouTube