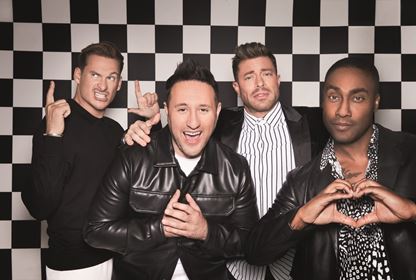 One of the UK’s most exciting and successful boy bands are back to celebrate their 20th anniversary with their 'Heart & Soul Tour', two decades since their smash hit No.1 debut album, All Rise sold over 1.4 million copies in the UK alone and was certified four-times Platinum.

Blue have announced their new album Heart & Soul will be released on 9th September and are looking forward to giving their fans a year to remember with a brand-new studio album as well as a UK tour.

The British four-piece, including all 4 original members - Antony Costa, Duncan James, Lee Ryan and Simon Webbe - have been back together in the studio working on one of their best records yet. Due to some very exciting plans to be announced in due course, Blue had to move back their tour a few months but you can now see them in December.

Tickets are in big demand so to avoid disappointment please don’t delay in booking your place.

Outside the entrance to the stadium - exact location to be confirmed nearer the time.

From the east: Leave the M4 motorway at Junction 29.

Rapports NCP Open Air Car Park and St David’s are open 24 hours, and are walking distance to the Arena.

Head to the centre of Cardiff. Motorpoint Arena is just a few minutes walk from Cardiff Central train station.

Book Now
Unfortunately that product is for the U40s.
Please Supply Your Date of Birth
Please enter your date of birth.
Spice on YouTube