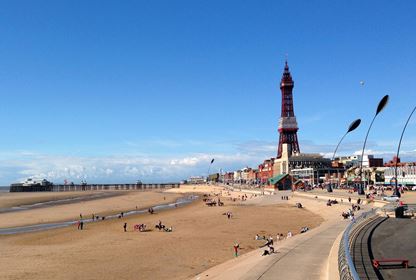 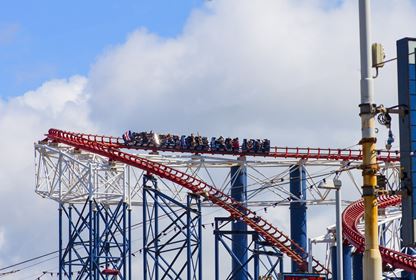 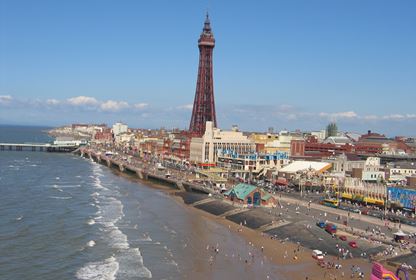 Join us for a sociable weekend in the fabulous seaside resort of Blackpool.

Although Blackpool has never had any airs and graces it has managed, by hook or by crook, to maintain its status as one of the UK’s most popular places for tourists. Its success can be put down to an endless dedication to unpretentious holiday entertainment: from pier shows to mind-blowing fairground rides, from tongue in cheek kitsch to the famous illuminations.

The 7 miles of golden, sandy beach is the reason the holidaying hoards came here originally with trams up and down the entire length of the sands with three amusement-laden piers. The sands are overlooked by Blackpool’s famous Eiffel-like tower – the only part of Blackpool that’s in any way similar to Paris. This is the supreme British seaside resort, with an overwhelming extravagance of amusements, fairground rides, and surreal seaside kitsch.

Explore Blackpool’s Winter Gardens, a series of pavilions built in 1878. They have an air of faded, dilapidated splendour: the Spanish Hall Suite is shaped like a carved galleon.

Besides the bucket-and-spade fun of the beach, there’s Blackpool Pleasure Beach a thrilling amusement park with a mind-boggling array of rides, including the UK's biggest, fastest, scariest rollercoaster: The Big One. As well as state-of-the-art rides, there is a brilliant collection of vintage rollercoasters, including the worlds first Big Dipper. Y

For watery fun, Sandcastle Waterpark is an indoor water complex with pools, huge slides, water cannon, water chutes, and more. Punctuating the beach, with more rides and amusements, are three Victorian piers, best and longest of which is the North Pier.

The Blackpool tower houses some most wonderfully old-fashioned entertainment, which as sequin heavy Moorish Circus and glittering Edwardian ballroom with regular tea dances. You can also take a lift to the top of the tower for astounding views.

2 nights Dinner, Bed and Breakfast in a modern AA rated 3 star hotel, organised activities, a beach or promenade walk and the services of a Spice host

Drinks, lunches, admission charges to activities and transport to walks if any taken

It is the North West of England, expect anything the weather could throw at us but if we are lucky we might get some May sunshine!

The Carousel Hotel is an AA rated 3 Star hotel in a prime location on the Blackpool South Promenade. With stunning sea views and within walking distance of Blackpool’s many Attractions, it really is well placed to spend a weekend exploring this seaside town. The 92 modern ensuite bedrooms vary in size & character each with tea and coffee making facilities, Wi-Fi and flat screen TV’s.

When You Get There

The Spice App is ready to Go!
We are enormously proud to announce that we are launching the long-awaited Spice App!
Continue Reading

Join in on our 40th Anniversary Celebrations
2021 marks 40 years since Spice started right here in Manchester - the brain child of our founder Dave Smith; Spice began back in 1981 from Dave's home in Old Trafford, Manchester running 12 high adrenalin, often madcap events a year but nowadays is very much about socialising, making friends, sharing adventures and bucket list events all whilst having fun with like minded people.
Looking back, Spice Nationally has had well over 100,000 members through our doors who have taken part in the vast array of events on offer - though of course we are somewhat curtailed with our offerings at the moment.
We are celebrating our 40th Anniversary with a fabulous Ruby Ball at The Midland Hotel in Manchester in October 2021 and we are already at 60% capacity after just 10 days of tickets being on sale to our members.
For all our supporters who are no longer in membership for one reason or another, you can add yourself to a list to be notified at a later date if we do have capacity for non members by contacting your local office.
In the meantime we have a full program of online events during the lockdown with lots of fun on offer in the Zoom Room - not quite the same as face to face but still very enjoyable and we hope to be at the very least back out walking in December.
To find out more about of 40th Ball click the button below
Continue Reading
More news
Spice on YouTube