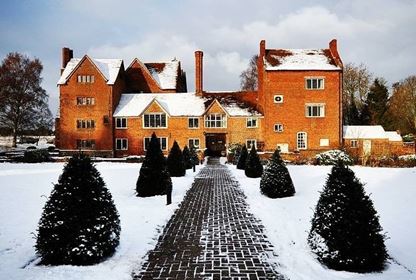 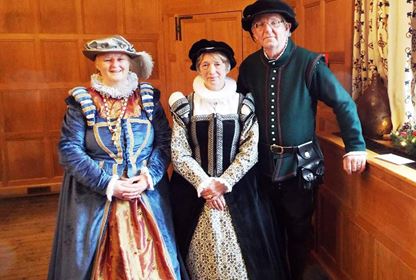 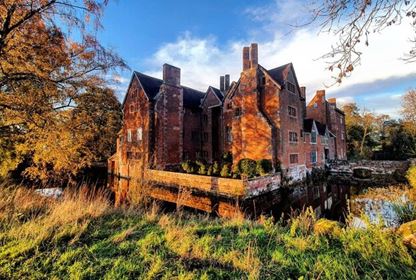 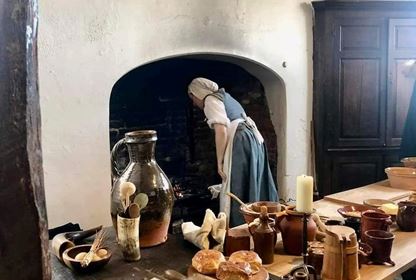 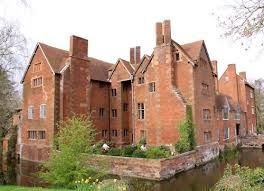 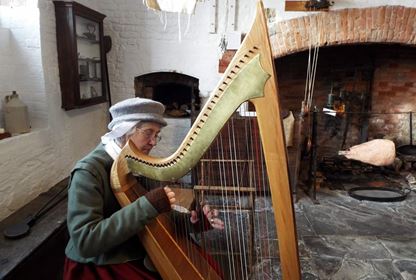 Today we have been invited to wander around Harvington Hall on this special re-enactment day, which will make us feel as though we have just stepped back into Elizabethan England! Set at Christmas time, the Hall will be beautifully dressed, with costumed reenactors demonstrating how the Hall would’ve worked, when the family were in residence.

As we wander through the rooms, we will feel the hustle and bustle of the Kitchen, with the cook and the servants preparing for the arrival of Humphrey's guests. Upstairs we will see the lady of the house and her maids. The Great Chamber will be a hive of activity with the musicians playing and Humphrey entertaining. The dance master may even try and get you to learn the odd Elizabethan dance or two! On the upper floors the nursery will be set up with Tudor games and the chapel will be prepared for Mass.

Although not specifically a guided tour, we will go around as a group and can expect costumed stewards in each room to talk to us about the Hall and its many secrets, including the priest hides!

After touring the Hall, we have arranged an optional extra Festive Afternoon Tea at The Malt House Coffee Shop for those who wish to add this option on.

Harvington Hall is a moated medieval and Elizabethan manor-house south-east of Kidderminster. Many of the rooms still have their original Elizabethan wall-paintings and the Hall contains the finest series of priest hides anywhere in the country. During the 19th Century it was stripped of furniture and panelling and the shell was left almost derelict. But in 1923 it was bought for the Roman Catholic Archdiocese of Birmingham, which restored it and now opens it to the public.

The Elizabethan House was built in the 1580s by Humphrey Pakington. On his death it was inherited by his daughter Mary, Lady Yate. In 1644 it was pillaged by Roundhead troops. Family letters refer to politics, London fashions and medical treatment, as well as business matters. In 1696 the Hall passed to the Throckmortons of Coughton Court in Warwickshire, who owned it until 1923.

The Malt House Visitor Centre offers a series of family activities and historic games, as well as an introductory film about the Hall and an insight into the processes of malting and brewing. Also on the artificial moated island, the Georgian Chapel is a peaceful space. Damaged by fire in 1823, after repairs it became the village school until 1913. It was restored and reopened for worship in the 1980s, and is still used for Mass today.

An Elizabethan Christmas at Harvington Hall

After touring the Hall, we have arranged an optional extra of a Festive Afternoon Tea at The Malt House Coffee Shop for those who wish to add this option on.

An optional Festive Afternoon Tea is available after the tour if desired. Please book this separately.

﻿This event exceeded my expectations. The guides were exceptionally informative and made the tour very interesting. Also and amazing cream tea.

This was a thoroughly enjoyable event even though rather wet. The tour guide Jill was excellent and very knowledgable. We had a long tour with her followed by a cream tea.

We then had a tour of the attics which was fascinating.Great day out.

Helen was brilliant (as always, based on this being my second event with her, with the reigns)

Harvington tour personnel were brilliant - brilliant 'cream tea' too - will always be tempted by the latter. Spice West Midlands Bulletin Friday 25th November 2022
Here is a link to our latest November Bulletin which includes details of our Christmas parties, new events just added and an option to give your event suggestions too!
Continue Reading