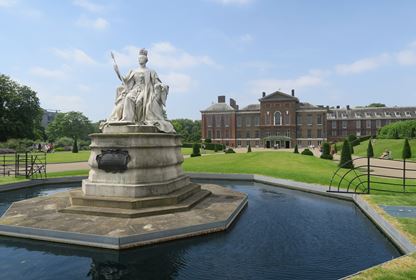 It is rather an exciting time to be visiting Kensignton Palace. With 2019 marking the 200th anniversary of Queen Victoria's birth, the palace are putting on quite the show. Included in your ticket is access to two new specially curated exhibitions exploring Victoria's life and reign. This year even the palace gardens have been designed in a way to reflect the trends of the Victorian age.

Not only is Kensington Palace the birthplace and intimate childhood home of Queen Victoria, it has been home to young royals for over 300 years. Marvel at the opulent state rooms and take a turn around the famous Sunken Garden. There is so much history and so much to explore. Do join us as we step back in time!

We will meet at the palace for 11:30, we are booked for our visit at 12pm. We will then head for Afternoon Tea for 3pm.

Victoria: A Royal Childhood - Discover the story of Princess Victoria, the young girl destined to be queen, in the rooms where she was born and raised at Kensington Palace.

This exhibition explores how an indulged young princess blossomed into the independent and iconic monarch we remember. The new display includes remarkable objects relating to Victoria's early years – including a poignant scrapbook of mementos created by her German governess, Baroness Lehzen, which goes on public display for the first time, and Victoria's doll house.

Victoria: Woman and Crown re-introduces Victoria as a young woman and explores her roles as a queen, wife, mother and empress of an expanding empire. Rare survivals from the Queen's private wardrobe – including a simple cotton petticoat and a pair of fashionable silver boots – provide a stark contrast to the black gowns she was so famous for wearing later in life.

The Palace Gardens - Planting in the palace gardens in 2019 will celebrate horticultural discoveries made during the Victorian era as well as promoting the vibrant colours that dominated Victorian decor. Remember to check out the magnificent statue of the monarch herself, which was designed by Princess Louise, Queen Victoria's fourth daughter.

Afternoon Tea at the Rembrandt Hotel

To round off our quintessentially British experience, we will head to the Rembrandt Hotel to enjoy the British custom of high tea complete with delicate cakes, finger sandwiches and fluffy scones with real cream and jam.

An update from Ski Val D'Isere 20
An update from the Slopes... some of our members have taken to the snow in Val D'Isere! They have been having a fantastic time enjoying the French Alpls and the Apres Ski celebrations. Val d’Isère is a ski resort in the French Alps, near the Italian border. With nearby Tignes, it’s part of the Espace Killy ski area were ski lifts give access to sites like the steep Face de Bellevarde, a black-rated piste, and the Grande Motte glacier. In town, bars and restaurants cluster around Avenue Olympique.
Continue Reading Did You Know....Spice Member Benefits
As a Spice  Member you are entitled to our Spice Extras with a host of special discounts for our members for a variety of companies, which are fully accessible when you have joined including; Cotsworld Outdoors, Go Ape, Golf Planet Holidays and many more.
Continue Reading
More news
Spice on YouTube